Get fresh music recommendations delivered to your inbox every Friday.
We've updated our Terms of Use. You can review the changes here.

I woke up in the future 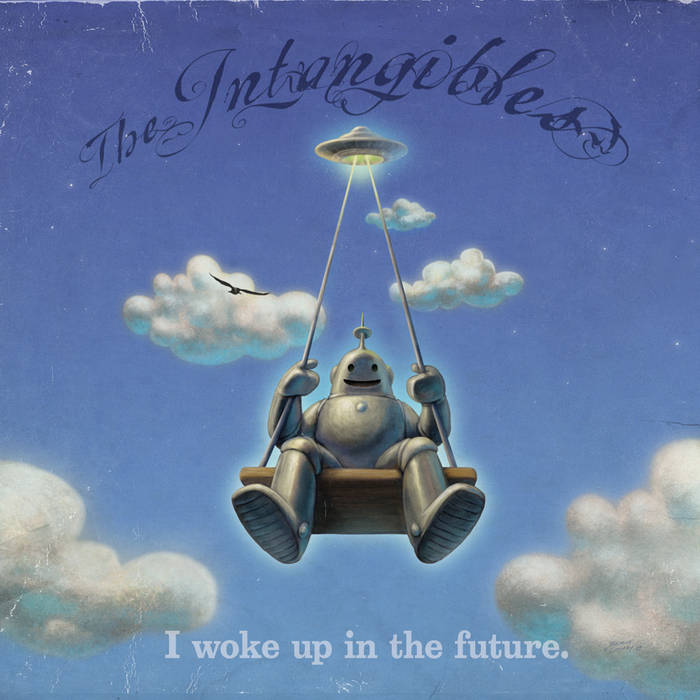 WATCH Video! vimeo.com/user1635295/religionclub
from the album "I Woke up in the future"

Shot in Times Square on a warm summer night The characters, tourists, lost souls and selfies that seek love and meaning in the center of the greatest city in the world... New York City.

Watch ALL the Intangibles videos at www.youtube.com/channel/UCGrGQ61yw0NvoHPHaKfVj9g

Drew "Android" Scholz - Guitars, slide Guitar and guitar that sounds like an old organ, and very spicy shrimp wonton dumplings. By day he fights for the rights of the common and not-so-common people.

Joe Scholz - drums and cymbals and General Tso's spicy chicken allwhitemeat1$extra, legal pontification. By day he fights for YOUR right to party, at work and at home!

PRESS/REVIEWS
Review by Bryan Rodgers
"The Intangibles are at their best when they tread somewhere between furrowed prog-rock intensity and accessible pop songcraft, and I Woke Up in the Future is a near-perfect blend of both. "

Many music fans argue about the proper length for an album, but they’ll all have to forgive The Intangibles for their 62-minute opus I Woke Up in the Future. The New York City trio needs an hour and then some to accurately convey their intelligent and multifaceted music, which is influenced by many of the great progressive and psychedelic bands of the last 50 years. To their credit, they manage to create an instrumentally arresting experience without sacrificing structure, songwriting, and singability, and they incorporate the classic sounds they love without any blatant artistic rip-offs. Even more importantly, the lyrical content matches the wit and diversity of the music.
The title track kicks off the album with a slightly modern feeling, though the band’s Zeppelin-worshipping roots peek through thanks to the spidery guitar passages and dramatic mood shifts. Indeed, it is the end of “I Woke Up in the Future” that ushers in the band’s more adventurous side.
There are plenty of moments of complex prog-rock and psychedelic exploration a la Tool, Porcupine Tree, or King Crimson, but songs like “Fortune’s Fool” and the icy “If You Can Hear Them Then They Can Hear You” also bring bands like Styx, Genesis, and Alan Parsons Project to mind. There are also traces of space-rock and shoegaze to be found, and ultimately, many of the influences inhabit the same song. “The Religion Club” starts with a mellifluous surge of throbbing bass and angular guitar in the tradition of Rush, but eventually winds up in a sweeping space that is reminiscent of dream pop a la The Verve. The violin-laden tune “Signals” is equally melancholy, blending jangle-pop acoustic guitar with insistent synth blips to create a kind of ambient-rock. “Watch Over You” showcases the band’s angsty side, “Try” deliberately twists cheeky 1950’s pop structure into a pure representation of alternative rock, and “All For You” imparts Beach Boys-style harmonies and mellotron onto a wistful pop bed.  As evidenced by instrumentals like “Telzy Toy,” which matches percussion and heavily effected guitar to create a kind of tribal fusion vignette, the band is more than capable of entrancing listeners with serious compositions. “Tundra” and “Blessed Innocent” are similarly stimulating sans words, but it’s not all serious business for the band.
Where “The Religion Club” and “Fortune’s Fool” reveal a wry but couched sense of humor, “Black Concert Tee Shirt” more blatantly pokes fun. The target? The “shabby chic” trend of exorbitantly priced retro garments with squalling guitars and satirical theatrics.
The Intangibles are at their best when they tread somewhere between furrowed prog-rock intensity and accessible pop songcraft, and I Woke Up in the Future is a near-perfect blend of both.
---------------------------

Artist: The Intangibles
Album: I Woke Up In The Future
Review By: Dan MacIntosh

The Intangibles give progressive rock a good name...this New York City trio takes a style that can be quite pretentious – to say the least – and plays it with a lot more warmth and relative simplicity.

This act describes its sound as “progressive rock with a psychedelic attitude,” and its psychedelic behavior is most apparent during a track called “Fortunes Fool.” This slow and moody tune, with its spacey keyboard sounds, affected vocals and jangling guitars, falls someplace between Pink Floyd’s Dark Side of the Moon, and The Beatles’ Sgt Peppers’ Lonely Hearts Club Band. It’s the kind of song that may affect some listeners like a psychedelic flashback to trippier days. Additionally, the track incorporates some lovely layered vocal harmonies, which may also bring back memories of The Mamas & The Papas and The Beach Boys.
This album’s title cut comes off like an updated Byrds tune, due to its jangling guitars, which has been filtered through Echo & The Bunnymen and with just a touch of garage rock thrown into the mix for good measure.

There are other places where the band’s words are a little on the strangely indecipherable side. “The Religion Club,” which also features strong traces of The Beatles. The song, much like a real life magical musical mystery tour, takes a lot of rhythmic twists and turns as it goes from a slightly grinding rock & roll groove, to a nearly classical section. Just what a ‘religion club’ is, however, is also about as mysterious as a mystery tour.

the group is not afraid to push the boundaries of music, while all the while obviously referencing the past.
It’s ironic that the group calls its new album I Woke Up In The Future. That’s because a lot of this album sounds like it could have very easily been recorded anywhere from the late ‘60s to the mid-‘70s. And that’s a good thing. Whether you find yourself waking up in the future or rolling out of the rack some place in the past, you would do well to play The Intangibles as your wakeup music. No matter where this lovely auditory oddity is from, spiritually, this act brings some mighty fantastic music from a heavenly place.
----------------------


The Intangibles
Review by Gary Hill
Rating: 4 stars (out of 5)
The music of The Intangibles combines psychedelic sounds with both classic and modern progressive rock and some hard-edged classic rock. It’s a blend that’s both familiar and new. It also works pretty much every time....In the end, it’s an exciting and entertaining musical adventure. Like most great albums, it’s a journey that includes peaks and valleys, mellower moments and harder rocking ones. It really leaves one wishing the recording technology used were better. Still, that deficit isn’t great enough to keep this from being an exceptional listening experience.

Cecil - Violin (Fortunes fool, The religion club, Signals, What I thought I saw)

Recorded, produced, and mastered by Beirne in Woodstock & NYC
Cover painting by Beirne

Special thanks to our families and friends

www.intangiblesny.com
Become a fan of The Intangibles! like us at
www.facebook.com/intangiblesband

Bandcamp Daily  your guide to the world of Bandcamp

The Hammer and The Relentless from the Boston band Malleus stop by for a chat.